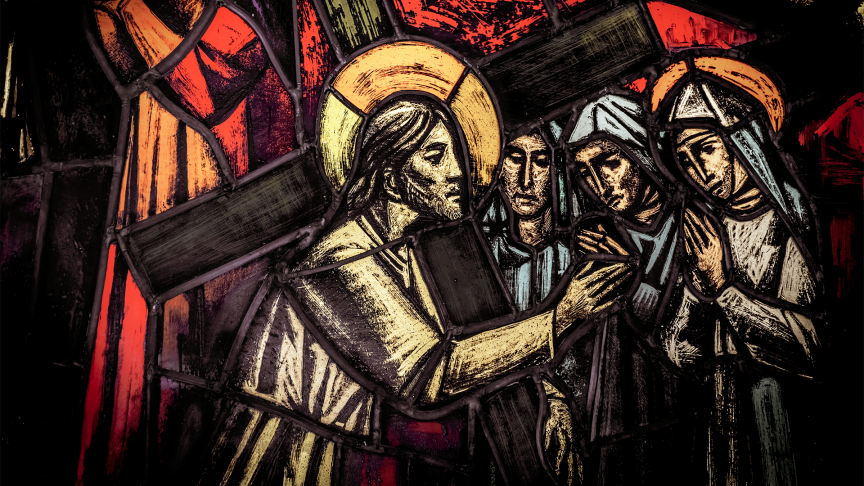 From the burgeoning early church comes the tradition of greeting one another on Resurrection Sunday by exclaiming, “He is risen!” met by the refrain, “He is risen indeed.” For Jesus followers, Resurrection Sunday, commonly called Easter, celebrates the death and resurrection of Jesus the Messiah and the inauguration of a new covenant between God and humanity.

The details surrounding the events of Jesus’ life and death are well-documented in the gospels and attested to in the extra-biblical literature of antiquity. That Jesus of Nazareth, a man born in Bethlehem and crucified by the Romans in Jerusalem, actually lived and died is generally accepted as historical fact. The meaning of His life and death, however, have been the subject of much debate and conjecture ever since the discovery of the empty tomb.

While most are familiar with the details of Jesus’ death and resurrection, many have not yet answered for themselves the central question of the Easter message: Who is Jesus?

A careful consideration of Jesus’ life can result in only one of two conclusions. Either you believe He is who He claimed to be, or you believe He is not. To definitively answer this question, we must carefully consider what it means to believe. In his classic book, “Mere Christianity,” C.S. Lewis famously wrote:

“I am trying here to prevent anyone saying the really foolish thing that people often say about Him: I’m ready to accept Jesus as a great moral teacher, but I don’t accept his claim to be God. That is the one thing we must not say. A man who was merely a man and said the sort of things Jesus said would not be a great moral teacher. He would either be a lunatic — on the level with the man who says he is a poached egg — or else he would be the Devil of Hell. You must make your choice. Either this man was, and is, the Son of God, or else a madman or something worse. You can shut him up for a fool, you can spit at him and kill him as a demon or you can fall at his feet and call him Lord and God, but let us not come with any patronizing nonsense about his being a great human teacher. He has not left that open to us. He did not intend to.”

As I read through the gospels recently, I was struck by the fact that every time Jesus cast out a demon it immediately recognized him (Mark 1:34). According to the Bible, even the demons believed Jesus was who He claimed to be.

The Bible says, “For this is how God loved the world: He gave his one and only Son, so that everyone who believes in him will not perish but have eternal life. …There is no judgment against anyone who believes in him” (John 3:16,18). What does it mean to believe? The demons believed and trembled (James 2:19), but I don’t think they will be in heaven. And in Acts 16:31 we read, “Believe in the Lord Jesus and you will be saved…” So what does it mean to believe?

Simply recognizing and assenting to the facts of Jesus’ life, death, and resurrection then must not be all that believing is about. It seems that what really matters is not our agreement with the historical facts, but rather how we live in light of what we believe about them. For those who believe that Jesus was the long-awaited Messiah, our lives must be marked by the changes brought about by our faith. Like Paul on the road to Damascus, an encounter with the risen Jesus should mark a turning point in our lives that is evident to the watching world.

In the English New Testament, the word “believe” is most often a translation of the Greek word “pisteoū,” which means to be experientially changed by the knowledge of a thing. It’s a verb with action inclined toward living differently in light of some newfound truth. And while the word “believe” in these verses is a faithful translation of the original Greek word pisteoū, the English word believe does not capture the full meaning and subtle nuances the original audience would have understood. To capture the fuller thought encompassed in the original language, try inserting the word love in place of the word believe as you read verses like John 3:16, or Acts 16:31, and then ask yourself: What does it look like to love Him?

Or read Jesus’ own words in Mark 16:16, “Whoever believes and is baptized will be saved, but whoever does not believe will be condemned” and insert the word love in place of believe to have a fuller understanding of what Jesus was talking about. This exercise can be helpful to better understand the difference between the simple act of intellectual assent and the act of living transformed by our knowledge of something.

The question each of us must answer for ourselves then is: Who is Jesus? If you are waiting for more proof before you believe that Jesus is who He claimed to be, what kind of proof are you waiting on? If you claim to believe, then how has your life been changed by this knowledge? Do you think, speak, act, and live differently in light of your belief in Jesus? Can the watching world tell by observing your life that you believe in Jesus? He is risen! And believing in that should change everything.